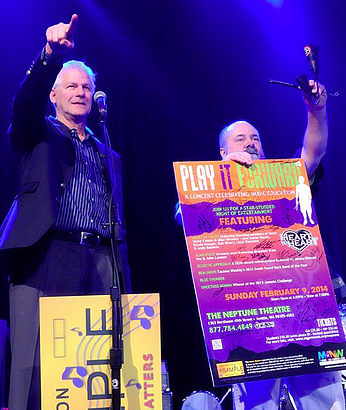 Five days following the devastating Tsunami that hit Southeast Asia on December 26, 2004, a group of friends performing or attending a New Years Eve party in Seattle took up a collection and donated over $500 to the World Vision organization to help with relief efforts.  Next they organized a benefit concert in January of 2005 to help those victims and raised another $10,000 which was donated to C.A.R.E.  This diverse group of friends, all with ties to the music community, recognized their powerful combination of music and philanthropy and agreed to pool their resources to benefit music education in Washington State.

Music Aid Northwest was born.  A governing board was elected.  By-laws were written, and 501 c (3) non-profit status was granted.  We partnered with Washington Music Educators Association (WMEA) and with local legislatures. Together we took our message to the citizens of Washington State. In 2010 a law was passed that allowed Music Aid Northwest to show that “music matters” through the purchase of Music Matters specialty license plates.  The first plates became available in 2012.

During this time, we also started the “Play it Forward” concert series where local musicians with a national and international following perform for the benefit of music education.  We started in a club, moved to a concert venue, and in 2016 are producing our first Music Matters Gala at the Triple Door.

The funds that are raised through the Music Matters license Plate project, and the Play it Forward Concert Series are distributed through a grant process administered by WMEA and Music Aid Northwest.  Teachers, with the support of their administrators, are encouraged to apply for these funds.  100% of the Music Matters license proceeds have been or will be donated to music education.  Administrative expenses are paid for from a small part of the proceeds from the Play it Forward Concert series.

An example of a scholarship recipient is the Prescott School District near Walla Walla.  Our scholarship funding of $6,500 was able to allow the music department to purchase musical equipment for its entire school program.  Prior to our scholarship, the high school band program was non-existent and the elementary program was in dire need of functioning instruments. With our help a k – 12 music program is beginning to take shape.

This is just one example of the schools across our state that are benefiting from your donations and your purchases of the Music Matter License Plates.  Please continue to support this important funding source for music education in Washington State schools. These dollars will never be moved into other programs or removed due to a budget deficit.

Thank you for all your support!